TAM 5: Shots from the reception 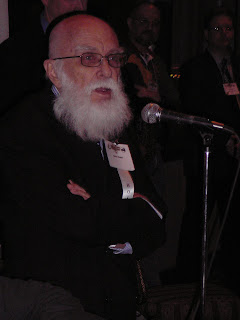 James Randi spoke briefly, thanked everyone for coming and remarked drolly on how amazing it was that he could pull together such a community just by being a guy with a reputation for saying things like "I doubt that."

Randi gave us some good news about bad news for Uri Geller, who's the target of condemnation by the Israeli parliament after a video hit YouTube of Geller thoroughly faking a stunt with a compass. He also mentioned he was going on The O'Reilly Factor to confront the notorious Sylvia Browne yet again; much as O'Reilly is an asshole, Randi says the guy hates Sylvia and is on the side of Good (for once) in this battle. We'l see. I'm — ahem — skeptical.

After he spoke, he was surrounded by a gaggle of fans, and I eventually managed to slip in there, introduce myself, and do the usual fanboy gush thing about how much I admired all his work over the years, and all that. He was a really cordial, approachable man, and that's cool. I know he gets to hear this kind of fawning from his fans almost as much as he hears the slanders of the woo brigade, and he's used to it. But at least I've had the experience of meeting him and shaking his hand. He appears hale and fully recovered from his recent heart troubles, so I predict more years of pissing off the paranormal charlatans are in the offing. 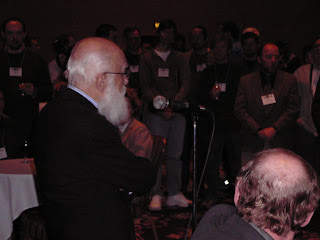 A little more mingling and I crossed paths with Reginald Finley, aka The Infidel Guy, who surprised me by recognizing me. I had no idea he had any idea who I was. I knew he was aware of the very active Austin crowd, but I guess he's seen some episodes of the old AE show when I was hosting. We talked quite a bit, and he mentioned some of his expanding podcasting efforts with The Debate Hour, a less aggressive show designed to draw in a wider audience of believers and introduce them to critical thinking. Really nice guy, Reggie is.

I'm wiped out. My body clock tells me it's just after 10 PM, while the clock radio by my bed here says it's only just after eight. Stupid time zones. Some of the guys are planning a pub crawl starting at eleven, which sounds like a great way to hang with some new folks. But having been up now almost an entire day, I don't think I'm quite up to it. So I'm gonna lame out and crawl into bed. 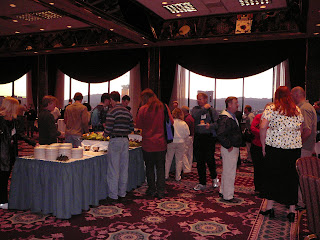 The speakers begin tomorrow, and I'll be updating regularly. See you then.