As mentioned before, Saturday was a much improved day over Friday, not only because the tech troubles had mostly been solved, but in that the presenters were much more entertaining, though no less substantive than Friday's. Later on I heard a story I couldn't prove, to the effect that the possible reason for Friday's nonstop laptop horrors (it got so bad that the only way Richard Wiseman could get anyone to hear his audio was to hold his mic right up to his laptop itself, which didn't sound at all good and didn't make him a very happy man) had to do with Lori Lipman Brown bringing her own sound guy for some reason, and this person is suspected of being responsible for the damaged connector found by JREF's A/V guy at the end of the day. As I said, no hard evidence here, but it could have been a factor. 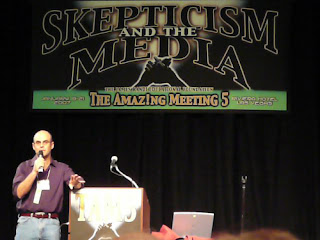 Regrettably, I missed much of the first speaker, NPR's Peter Sagal. But I caught the tail end of his talk and all of his Q&A. Like most of Saturday's speakers — up until Christopher Hitchens, anyway — Sagal set a lighthearted and humorous tone that would be followed for most of the day. One interesting thing he brought up was that, despite NPR's reputation for being this leftist bastion, NPR really does go out of its way to avoid offending listeners — with the inevitable result that they reliably end up being offensive to lots of people. Sagal mentioned he thought NPR was actually too cautious about trying not to be inflammatory. 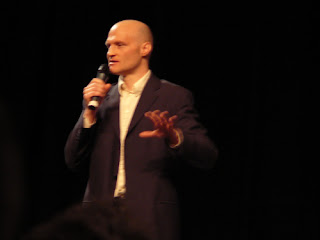 Sagal was followed by a moment of pure hilarity in the form of The Onion editor Scott Dikkers. At first I thought, Hmm, he's not really being all that funny for a guy who edits The Onion. And then, I of course realized he's a master of the classic form of deadpan comedy, allowing screenshots of the O to speak for themselves while he delivered his own commentary — the overriding theme of which was that we should always believe everything we read in the media — in a calm, reserved tone. Dikkers' presentation peaked with his demonstration that The Onion is so true that it's actually predicted the future, showing articles (all of which appeared as Onion satires before actually occurring in real life) about Chris Farley's death (whoops!), Gillette releasing a five-bladed razor (here's the Onion bit, and here's the real thing released the following year), and Bush's 2000 win ushering in a brave and courageous end to world peace and domestic prosperity. With such remarkable proof of The Onion's precognitive talents on display, Dikkers had no hesitation in immediately demanding the JREF million dollar prize. Somehow, it wasn't quite enough proof for Randi, who nevertheless told Dikkers he'd made his day. Damn those picky skeptics! 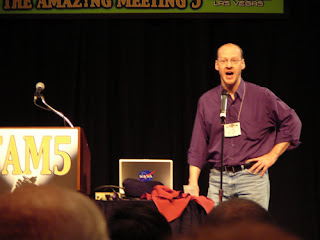 The last speaker in the pre-lunch bald-guy parade (hey, they said it, not me) was Bad Astronomy's awesome Phil Plait, who began his talk — in obvious physical pain, I must say — conceding his crushing defeat to Pharyngula's PZ Myers in a recent best-of-the-web poll, which PZ eventually won in a "suspicious" eleventh-hour rush of votes that put him over the top. First Phil acknowledged the greatness that is PZ... 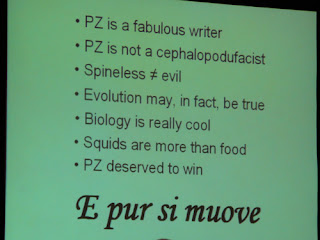 ...followed by the comforting reassurance that it was just as well PZ won, because if he'd lost, the deal evidently was that PZ would agree to appear in the 2007 Skepdude Calendar. And Phil just happened to have the photo. 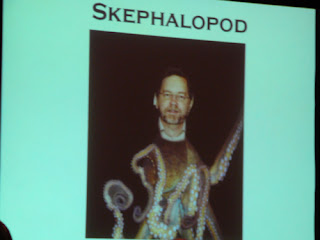 Phil then went on, in the spirit of the conference's media-related theme, to fisk an absurd "documentary" that appeared on (of course) Fox about five years ago that gave credence to that stellar gang of asshats, the moon landing deniers. If you ask me, these people are as big a bunch of reprobates as creationists, and Phil showed how they're no less brazen in the lies they tell in order to promulgate their crazy conspiracy theories in the media. Plait pointed out just how slickly packaged the show was, and how it sleazily manipulated its audience, not by making any outright, actionable claims, but by what it craftily left out, thus prompting viewers to think, "Well, gee whiz, maybe it was all a big fake!" It was a prime example of how the art of editing can build innuendo, and commit egregious lies of omission in order to get people to take any asinine claim seriously.

What is amazing about the fact anyone takes moon-landing-hoax claims seriously is that the "evidence" these people point to is so pitiful that anyone with the slightest bit of understanding of the issues involved can refute them with no effort at all. There's just no critical thinking going on at all among these conspiracy kooks. Several moon landing deniers, for instance, claim to be photography experts. And yet they appear unacquainted with such basic photographic issues as lens flare, perspective and horizon lines, and even ASA speeds and exposure times. Why don't you see stars in any of the moon-surface photos? The deniers say it's because it was all done on a sound stage in Area 51 (no shit, a guy in the doc actually said "Area 51"). People with brains who know how cameras work will tell you it's because the astronauts were using slow film and adjusting their f-stops to show a clear lunar surface, not the sky. To expose the film for long enough to pick up a sky full of stars would have resulted in such a blazing white, glared-out lunar surface that the whole shot would have been a loss. As someone who works in the film business myself, allow me to give my expert assessment of Phil's explanation: Duh! Now someone tell Fox and these shitheads who claim to be photographers.

In this photo, Phil uses his belt to show how a flag can appear to be "waving" in an airless environment. 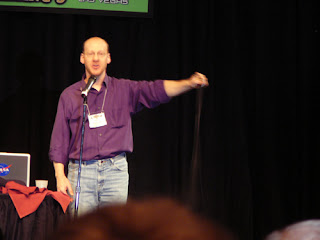 In all, Phil's talk was a spectacular and, though funny, deeply sobering demonstration of how easily the media can influence public opinion through deception. It's one more reason the pro-science camp needs to learn to be more media savvy, in order to find ways to communicate facts to a confused public and show how the truth about science and the universe is far more wondrous and compelling than the bleak fear-mongering and go-nowhere ignorance they're currently being given. Phil's final shot was this wonderful autograph from Apollo 12 astronaut Alan Bean. 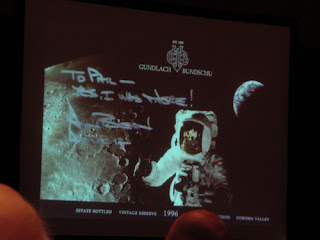 Says it all, I think.

Back later with the second half of Saturday.