Well, remember what I said last night about being wiped out and going to bed? Wrong! I realized that if I go to Vegas for an awesome conference and crash early, then damn it all, I haven't been to Vegas for an awesome conference. And so I mustered up my second wind, went downstairs, and saw an impressive performance by the mentalist Banachek. Maybe I'll discuss that in more detail later, but for now... 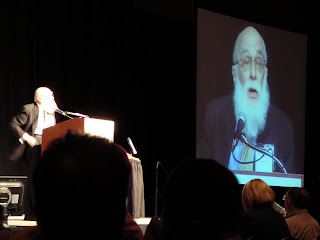 This morning's speaker session began with Hal Bidlack introducing Randi once again. This time Randi said some things that will be music to any skeptic's ears: the JREF is going on the offensive against paranormalism and bullshit. Randi is revising the terms of the famous Million Dollar Challenge in the interests of rededicating himself to his debunking efforts following his physical recovery.

The problem over the years has been too many Mickey Mouse losers applying for the Challenge, few of whom can even state their claims coherently, and none of whom really has any kind of reputation in the media or elsewhere. Now, Randi's detractors in the woo brigade often dismiss the Challenge as a publicity stunt, and in truth, publicity is part of the point. The JREF wants to educate and inform the public and promote critical thinking, and reaching the public through the media is the best way to do it. But why should the media care about some kooky dowser from Bumfuck, Iowa?

So the new terms of the Million Dollar Challenge, going into effect on April 1 (heh), will be that applicants must have some kind of media presence, like Sylvia and John Edwards, and that there must be someone in a position of authority and influence — academically or otherwise — who feels that the claimant is worth taking seriously. This will weed out the nonsense, and pique the kinds of media interest that will help bring the message of thinking critically about extraordinary claims to a public who are given far too many reasons to be credulous. I like it. I especially liked the idea that the JREF is considering a major New York Times ad on April 1 announcing the new terms of the Challenge and expressly inviting Sylvia, Edwards, Uri Geller, and James von Praagh to partake. Bring the fight right out in the open!

Finally, Randi announced intentions to forcefully pursue (sorry, split infinitive) legal actions for fraud and other crimes perpetrated by woos shown to be false and who yet continue to take money from the gullible. All good plans! 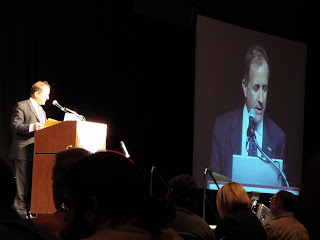 Skeptic magazine's Michael Shermer then came up to give an interesting if not earth-shattering talk on the topic of his next book, the evolution of economic systems. He described both evolution and economics as complex adaptive systems; in small bands like hunter-gatherers, trading was adequate as there are no specific individuals accumulating mass wealth and hogging resources. In bigger civilizations, one gets more disparity, and you end up with the super-rich like Bill Gates, who cause as much discomfort as the super-poor panhandling on the streets (though in Gates' case, I think envy is playing a role). So more complex economic systems evolve to meet the needs of a larger populace. And this can be tied into our biological evolutionary heritage, which likes the idea of "reciprocal altruism", i.e., fairness. It isn't really my field, so the topic didn't grab me by the nads. But Shermer seems to have thought it out skillfully, so I'm thinking the book with be worth checking out. 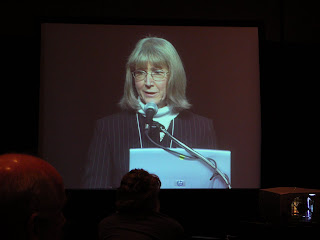 Next, the NCSE's awesome Eugenie Scott took the podium to give the first brilliant talk of the show, tracing the evolution of the creationist movement from "creation science" to ID. In addition to covering the basics, Scott made a number of astute points, some of which I hadn't considered. One of these I had considered is that the IDers have been more skilled at using the media than pro-evolution scientists. Ironically, they have even been better about getting out the message that they are the ones interested in skepticism and critical thinking, with their "teach the controversy" mantra and their knack for portraying science as a dogmatic practice.

Scott pointed out how the media's focus on the generally laudable practice of fairness taints the real issues. Proper balance is achieved by presenting both sides of an issue accurately. That is not the same thing as giving both sides equal credibility. IDers have done a remarkable job of working the media and covering up the fact that they don't really do any science.

Scott suggested that scientists need to counter ID creationism in a positive way that promotes the practice of science and critical thinking and how to apply it well. She pointed to the Kitzmiller trial as a landmark effort in this, in that, for the first time, people who haven't been at the forefront of fighting ID nonsense for years — like Judge Jones and the army of reporters covering the trial — finally really got it. Michael Behe made a fool of himself on the stand in Dover, and what's important is that the press understood that, and coverage of Behe was commensurately humiliating. This isn't and has never been about "dogmatic Darwinists" "censoring" ID's "controversial" views in order to "protect evolutionary dogma," to regurgitate a lot of ID buzzwords. It's just about making it perfectly understood that ID just plain ain't science. And in science class, it's about teaching science. Evolution, like heliocentrism or any other settled scientific issue, is not a matter of opinion. Being "fair and balanced" is all well and good when you're letting people air opinions. But science isn't about opinions or belief. It's about empirically demonstrable facts. 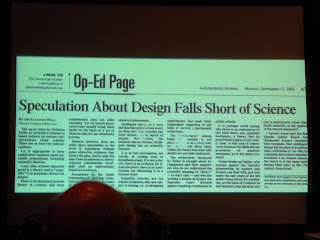 Scott accompanied her talk with a host of fantastic PowerPoint slides showing the depth of the swill one has to wade through when combating ID/creationist nonsense. It's both funny and sad all at once.

Well, I'm taking time out of the lunch break to bring you this. So I'm going back downstairs. (For ten bucks a day, the wifi here sucks ass. What's the deal with getting no signal at all in the convention center? I mean, duh! Hello?) I may not post the next update for a bit, as I need to renew the service for another day. So I may wait till late tonight in order to stretch my money out better. Of course, anyone who'd like to help defray these little costs can Paypal me at mw_director at yahoo dot com, but, like Banachek was saying all last night in his act, "Now, I'm manipulating you! Don't let me do that!" Ha!