The general opinion so far of my friends Thad and Stacie Engeling (the latter of whom is Ms. November in the 2007 Skepchick Calendar, by the way) is that TAM 5 has so far not been as good as TAM 4. But a lot of this is probably due to the fact that Friday afternoon's talks were frought with stupid technical glitches. It can't be terribly difficult to output audio from a laptop to a public sound system, but it happened with almost every presentation. In addition, presenters with video on DVD-R's often encountered the aggravating problem of their discs not playing properly. In all, the afternoon was a little bit of a mess, but there were still some fine presentations going on.

Nick Gillespie and Ron Bailey from the libertarian Reason magazine were scheduled to follow Eugenie Scott, but as everything was running late they've been bumped, so we'll see if they speak today. 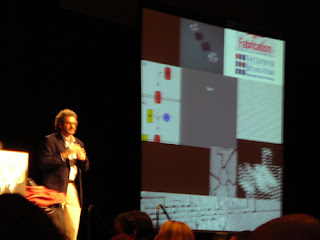 The first post-lunch speaker was a fellow from MIT named Neil Gershenfeld, who talked about advances in nanotech and how they will make manufacturing a much more democratic process. His team has set up "fab labs" all around the world, with the result that even little kids are making some cool gadgets. He's also pointed out that since he introduced a class at MIT all about this, which he initially expected to appeal only to a handful of engineering dweebs, he has in fact been flooded with hundreds of students who just wanted to make stuff. What he's discovered is that the killer app for this kind of tech will be personal tech, and not necessarily mass-produced things for the marketplace. I wasn't expecting to get into this talk that much, fearing it would slide headlong into tech-talk-land and lose me utterly, but Gershenfeld, in full hip-prof mode, made it utterly compelling. It was great to see how young kids living in the developing world, when exposed to this kind of knowledge, really had a hunger for it and absorbed what they were learning like little sponges. I can foresee a time when online communities of fab junkies are trading their manufacturing templates via p2p, and spitting out all kinds of nifty things on home replicators. Time will tell. 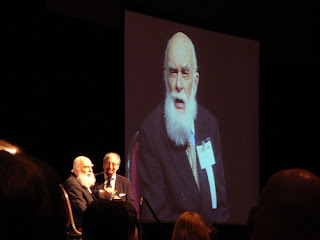 What followed was an interview with Randi by his friend Jamy Ian Swiss. We were shown quite a lot of amusing video from a Korean TV show that invited Randi over to debunk a whole host of their local paranormalists. Randi coached the show's producer on what to look for when he and his crew went out to various psychic presentations, and, in contrast to the way an American TV show would insist on presenting woo with 100% credulity, this producer turned out to be a debunking champ, laying awesome traps for spoon-benders and psychic "healers" that Randi admitted he himself could not have improved upon. A simple hidden camera showed one spoon bender just bending the spoon the normal way when he thought no one was looking, and a Malaysian healer whose schtick is that electricity flows through his body (he did a trick that Randi had no trouble duplicating in the Korean studio) was shown to have tricked out his sandals with a battery pack. The dude also nailed Uri Geller, pissing off the Israeli fruad so much he threw them out of his house. Hilarious. 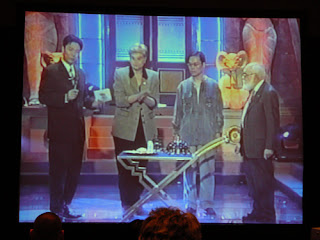 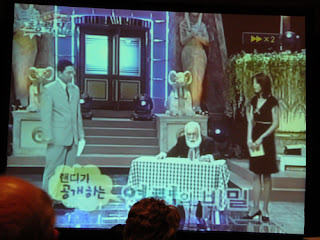 It was terrific watching these clips, but the whole presentation ended up getting a little overlong and repetitive because the DVD player they were using had the hardest time cueing up to the right spots in the DVD-R. 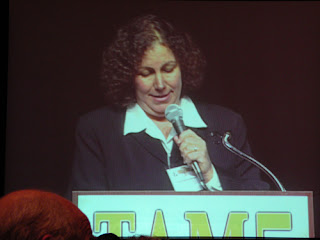 Technical glitches continued with Lori Lipman Brown, lobbyist for the new Secular Coalition of America, the first lobbying group for atheists. Brown was a decent speaker once she stopped just reading from her prepared remarks, and she presents a nice face for atheism in the public square. Still, she was fairly unprepared for the abject disrespect from Fox News interviewers, getting that deer-in-the-headlights look when confronted by O'Reilly; she showed three clips from Fox News interviews, two from the Factor. Still, she mentioned that she hasn't received any disrespect on Capitol Hill simply because she's representing atheists, and I hope once she develops a slightly thicker skin and cangive as well as she gets in front of TV cameras, she might be someone to exert some real influence. She ain't there yet, though. Overall, her presentation was brief, a nice relief from the extreme length of the Randi interview and its glitchy videos. 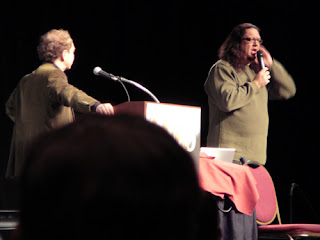 A Q&A with the ever-popular Penn & Teller followed, who were both funny and warm as they fielded questions from the crowd, many of whom had clearly worked up the funniest questions they could think of well in advance. Some of the better questions involved the benefits/liabilities of working with Showtime versus using DIY broadcasting technology online like YouTube. They also related the hilarious story of the video game Desert Bus, in which nothing happens except that you drive a bus from Phoenix to Vegas for eight hours. 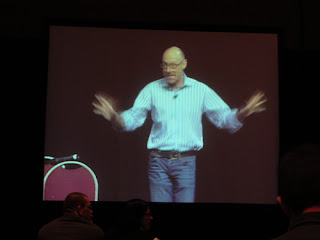 But as funny as Penn & Teller are, the real comic genius of the day was the energetic Richard Wiseman, who talked at a machine-gun pace, peppering his speech with off-the-cuff jokes that had everyone belly-laughing. Wiseman has a reputation doing lots of debunking over in his native England, most prominently the claims of the kookoo Rupert Sheldrake, who thinks dogs and parrots have ESP. Sheldrake believed he had proven a little terrier was psychic because she always ran to the window at the precise moment her owner was coming home, even if the time was entirely chosen randomly. Wiseman set up his own cameras on Sheldrake's invitation and learned that the dog was in fact going to the window all the time. (Again, Wiseman had several minutes worth of his own laptop issues before we were able to see the videos.)

Wiseman went on to talk about how he's seeking to use the media, not just for debunking efforts, but in a way that presents science entertainingly. He gave us the whole story of a stunt in which an investor, a "financial astrologer," and a five-year-old girl were invited to choose the best stocks, and after six months, the little girl was the only one who hadn't lost money. Then there was the long saga of the humor research program to discover the funniest joke in the world (it's not quite) by allowing thousands of people to submit jokes to a website, then screening them through public votes down to the most popular one. 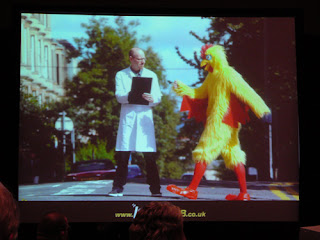 Wiseman, the final speaker for the day, is a hilarious guy, and he's the kind of bloke I'd love to see doing more work for skepticism in the public arena. After the room was shutting down I managed to locate him and we had a good talk walking back to the elevators. I was particularly interested in his talk, as I told him, because a few years back I got into a brief Wikipedia edit war with a Sheldrake fan and woo believer who was editing Wikipedia's ESP entry, both to slant the article to a pro-paranormal bias, and also to add about a dozen links driving traffic to his blog. I hadn't heard about the dog experiment before dealing with this clown (who believed Sheldrake's results utterly), but it was evident right away to me that the way Sheldrake set up his own test proved the guy has no clue how to run a controlled experiment to save his life. Sheldrake's response to Wiseman's findings has, of course, been to lie and say Wiseman got the same results he did. Of course, Wiseman showed the dog did indeed go to the window at the precise moment her owner was coming home. But she also went to the window nearly every five minutes before and after that point as well. I'm a dog owner and know full well these are creatures of habit; my dogs know when it's walk time, and if I'm slacking off online they'll come to get me and bark indignantly that they're ready to go. Are they psychic for knowing this? No, they just know how to learn routines. It's what dogs do. Sheldrake's work is just a prime example of confirmation bias in action.

Anyway, that was the end of Friday. I've decided to skip the continental breakfast this morning. Today has another solid roster of speakers — Phil Plait, Christopher Hitchens, and...wait for it...Trey Parker and Matt Stone! So I hope fewer techie troubles plague the day and everything goes a lot more smoothly.