Chocolate is the reason for the season!

Okay, I know everyone is still looking for that final TAM report. I am working on it (amazing how, when you return from a vacation, life just...slams you back into a routine). But this, I felt, was too good to pass up.

If there's one thing I dearly, dearly love, it's getting the "Action Alert" newsletters from Donald Wildmon's American Family Association. I even love the name alone. "Action Alert"! One imagines a fundagelical prayer warrior, sitting at home minding his own business, when suddenly, a red light starts blinking (with accompanying staccato buzzing noise) on his computer! He leaps up, tearing off his shirt to reveal an AFA superhero costume underneath, and, grabbing his Bible — whoosh! — he's out the door as his wife and kids wave to him, calling out, "Come home safe, Daddy!"

In reality, the Action Alerts are not nearly so Action-Packed. It's mostly the usual round of homophobia and we're-so-persecuted stuff, along with calls to boycott this or that other business that isn't sufficiently genuflecting to their Christian superiority.

Most recently, the AFA wants to extend the shelf-life of the War on Christmas by turning it into a War on Easter. As has been reported many times, the War on Christmas was created by Christian activist groups for the purposes of fundraising. It's a cash cow, with groups like the AFA stirring up persecution fears in their flock in order to sell zillions of dollars in buttons, decals, and the like. The fact of Christian Right groups being dishonest and sleazy is not, I know, earth-shattering news. But it's sad that so many are still so easily suckered by it.

Not the least bit concerned that their motives are nakedly obvious to the rest of humanity, the AFA is sounding the "save Easter by sending us money" klaxon loud and clear. Their latest cash cow (cash calf?) is this button/magnet series to let the filthy unsaved know goddamn good and well that Easter is not about bunnies and chocolate. Nor is it, as them evil librul professors will tell you, a ritual originating in pagan cultures related to the vernal equinox in which they honored their goddess Cybele/Eostre/Astarte. Nope, it's all about their god-man coming back to life at the end of that Mel Gibson movie...and nothing else! And what better way to remind those unsaved heathen about that fact than by sending Donald Wildmon a lot of money for some of these:

This is your invitation to sponsor you [sic] church's participation in Silent Witness Week, to be observed during Holy Week April 1-8. Imagine this: Thousands of Christians wearing a very attractive lapel button which reads: Easter. He Lives! ...This extremely attractive button is a silent but effective witness to Jesus and the Resurrection story. Wear it while shopping, at work, at school, etc. Silently let others know that Easter is about the Resurrection of Jesus Christ, not a bunny or eggs.

Now, as Bugs Bunny often would say, "You realize of course that this means WAH!" I'll put up with a lot from fundagelicals. But when they diss the Bunny and His Magic Eggs, they've gone too fucking far!

So in the spirit of the season — especially the "making money!" part — I've decided to respond with a button/magnet of my very own! Bask! 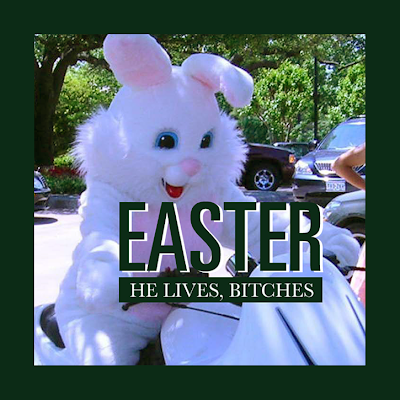 And you can order this lovely item right here!

Imagine thousands of atheists spreading the good news of chocolate and colored eggs to all of humanity! And all via the effective "silent witnessing" tool of a simple, elegant button or magnet!

What's more, because I'm such an awesome guy, I'll do something the AFA would never consider. If you are actually inspired to plunk down perfectly good money for these things, I'll donate half my profits to my best friend's just-opened cat rescue. Granted, cats are not rabbits, but when you have 50 of them in a shelter you note that they do seem to lay a great many chocolate eggs. (rimshot) And, like rabbits, they're both small, furry, warm, cuddly, and great in a stew. (I got a million of 'em!)