Hey gang. Did you hear?

George W. Bush is not the president any more! He's gone! Out!

That frackin' miserable useless failure has joined the expanding ranks of our nation's many unemployed! 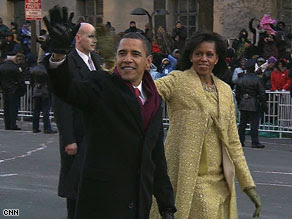 We have a new guy. I like him. I have high, but realistic hopes for him. I do think there has been a bit of excess from the media hype machine about his inauguration, but I put that down to pride over the fact that the USA, with its utterly appalling history of racism, has elected a non-white president, as well as general excitement over the fact that George W. Bush is no longer the president!

I'm pleased to be living in an America where the people are excited, rather than appalled and embarrassed by, our president. But go easy on the rockstar stuff. President Obama has eight years of almost apocalyptic disaster to fix. It will take time. He will have failures as well as successes. He knows how hard a row he has to hoe. I just want all of his slathering fans supporters to know that too. The higher they build you up, the longer and harder the fall you may be in for. Just remember, Obama is a man, not a messiah. I think he stands to be a better president than most we've had in my lifetime. But let's keep our heads, and stay realistic. Today's excitement aside, tomorrow we're back to workaday. There's a big job ahead.