And...it's convictions on all ten counts for pedophile cult leader Tony Alamo! Naturally, his response is the typical self-aggrandizement of the pathologically narcissistic. "I'm just another one of the prophets who went to jail for the Gospel." Some "prophet"; he couldn't even prophesy his own fate. No, Tony — or Bernie, I mean — you're just another one of the perverts who went to jail for porking little kids.

So, to complete our celebration of Alamo's downfall, I guess it's time now to pick our winners in the "Can you write like allexus8?" contest. So...below are the links to the entries, and in the sidebar is the poll to vote, which will only be open 5 days. (There is such a thing as flogging a joke to death.) Have fun, and maybe, in five days, I'll have thought of a prize. Unless allexus8 wins. You've already got your prize, haven't you?

The entrants are... (feel free to imagine a drum roll here, if you want to play this out to full cheese effect) 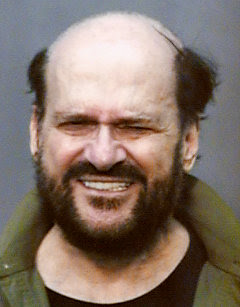 Something distresses me about this photo of Alamo. I'm sure the resemblance to our very own beloved John Iacoletti is totally coincidental.