Harold Camping's May-21-Rapture nonsense is so ubiquitous that there's no point in doing anything other than rolling with it at this stage. American Atheists will be holding Rapture parties in several cities. Matt is attending one in Oakland, in fact. Meanwhile, Tracie and I will be on the show Sunday, holding down the post-apocalyptic fort and taking calls from our far-flung global correspondents (i.e. you) reporting on the Rapture's impact on your own towns and countries. How many Christians have vanished in your area? None? But since the 21st is absolutely and without question the day of the Rapture, won't that mean that Christians have been worshiping a false god all this time...? 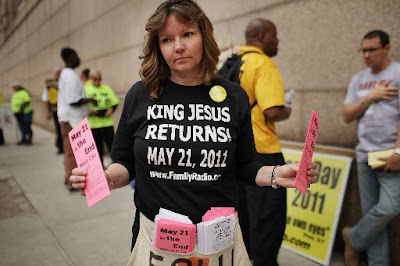 Someone else isn't pleased about this little media circus, however, and that would be the folks at the Christian Worldview Network. The CWN is Brannon Howse's House of Paranoia, basically, and they're a funny bunch, because they disdain other "loons" on the right-wing fringe — they absolutely cannot stand the "deceptive" teachings of Glenn Beck and Rick Warren — while at the same time embracing no end of fringe lunacy themselves. I think at various points in time they have accused Obama of being a communist, a socialist (actually, Howse prefers the term "Fabian Socialist" because it makes his flock think he's really read up on the subject), a Marxist, a terrorist, and possibly even a reptilian space invader. They're birthers too, which, compared to all the rest of it, is fairly tame.

In an article in their most recent newsletter with the weary title "Will This Ship of Fools Sink May 22?", Jan Markell minces no words. Camping is totally cuckoo-for-cocoa-puffs, and she's upset that he's given us annoying atheists such fuel for mirth.

There's going to be a party given by "heathens and skeptics" and I hope you have no desire to attend it. They intend to get together to mock the rapture. After months of enduring the unnerving dogmatism of Harold Camping's billboards, signs, cars, radio commercials and bumper stickers heralding the end of the world as we know it on May 21, American Atheists have announced that they are planning "rapture parties" in Oakland, Houston, and Fort Lauderdale on May 21-22.

The atheists boast of their own billboards which state, "The Rapture: You KNOW it's Nonsense. Learn the Truth at our Party." The billboard is designed to knock two millennia of false predictions that the world was about to end. So, they are having a party to celebrate another rapture that wasn't. And the atheists will be more accurate than the Christians because they are going after the date-setters.

Catch that last bit? See, what's wrong with Camping is that he was incautious enough to set a date. And that's what makes Christians look stupid. Because you can only control people effectively through nonsensical, superstitious prophecies of future events if you leave them vague and nebulous. Even Vito Corleone knew the psychology involved in keeping people wondering: "Someday — and that day may never come — I may come to you for a favor."

Markell wants Christians to be clear on one point: there totally is going to be a Rapture. We are in the "end times," and the clock is ticking. Naturally, she's just making this up no less than Camping is, but she's leaving herself endless wiggle room. "We cannot know!" But Jesus is coming. For realz. Just...whenever.

Markell sees a lot of negative fallout when May 22 rolls around, and the world (yay!) and all its Christians (sigh) are still here.

What can we know for sure will result from Camping's prediction?

As to that last, of course we will, because all of this is pants-on-head, paste-eating stupidity, and when grown adults exhibit this sort of thing, mockery and scoffing is the absolute least it deserves. What Markell can't see is that she is sailing, if not on Camping's same "ship of fools," in the same fleet. What exactly gives her eschatology any more basis in reality than Camping's, apart from the fact that Camping's will be decisively proven to not have happened when there's no global earthquake this Saturday? The Bible is the Big Book of Multiple Choice, and while Camping can play with interpretations to work out that the end will come May 21, and Markell clings to Matthew 24:36, there is also Matthew 24:34, in which Jesus makes it clear he expected the end times to begin in the lifetimes of his disciples. (And I guess he was wrong, which would make the Son of God Himself one of the "false prophets" the rest of Matthew 24 warns against, eh?)

Markell worries that "Jesus is coming again! But thanks to Harold Camping and friends, on May 22, more may be laughing and scoffing than anticipating." The lesson Markell ought to take from this, but won't, is that as long as she devotes her hopes and wishes and goals towards a vague promise of future divine salvation, instead of breaking away from the shackles of such irrational nonsense and embracing reality, and real solutions to real-world problems, then her ship of fools will itself keep sailing on...right over the edge.