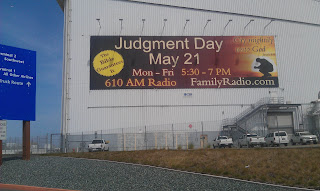 The billboard, like the people who paid for it, were still there on Sunday...

Continuing on with Saturday's speakers...

Ashley Paramore from the Secular Student Alliance did a great job educating us on how to better connect with campus groups. As it turns out, not only do they enjoy pizza (preferably free) they might also be a bit tired of lectures (who knew?) and there are other events that might be more to their liking. In all seriousness, the ACA has worked with campus groups at UT, Austin and many of the things that Ashley said (which should almost be common sense but, sadly, are not) will be helpful to our group and to many others that want to help support campus secular groups. I won't be advocating the exact model that Campus Crusade for Christ uses, but there are good lessons to be learned there.

Lewis Marshall, President of the Atheists, Humanists and Agnostics at Stanford University spoke about freethought activism and working with interfaith groups. (There were some unfortunate audio problems during his talk and I missed part of it.)

Keith Lowell Jensen offered highlights from his stand-up comedy routine. Legitimately entertaining and funny, he's been doing atheist-themed comedy for a while. He was kind enough to give me one of his CD's and I planned to listen to it on the flight home, but I couldn't find the CD-drawer on my iPod, so I'm going to rip the audio off later and listen to it tomorrow...or at least before the next scheduled rapture.

David Eller, Assistant professor of anthropology at the University of Colorado, Denver gave the first of two talks (I want his agent...or maybe any agent) for the weekend. He's the author of several books and the latest is Cruel Creeds, Virtuous Violence: Religious Violence Across Culture and History.

The first talk covered some of the content of the book, focusing on religious violence and cultural perceptions of violence. It's not a talk I can fairly summarize, but I definitely enjoyed it and I'm looking forward to spending more time talking to David in the future. He said a number of things that made me reconsider the way I look at things and that's something that I really appreciate.

There was a dinner break at this point and I did a few interviews with local news stations. As it turns out, I was on one station for about 3 seconds and...they pretty much gave me the last word. That's great and fairly unheard of! It's almost enough to make me move to California. I had spent a few moments during my talk mentioning how religious figures always seem to get the last word on every atheist news story and no one had ever given me the last word on a religious story. I'll have to change my talk, but I'm glad to do so!

As dinner was wrapping up, Brian Dalton (Mr. Deity) appeared, as if by magic and almost precisely timed with the countdown to the rapture (SPOILER: nothing happened). Some of the speakers got together to pose for various rapture photos: 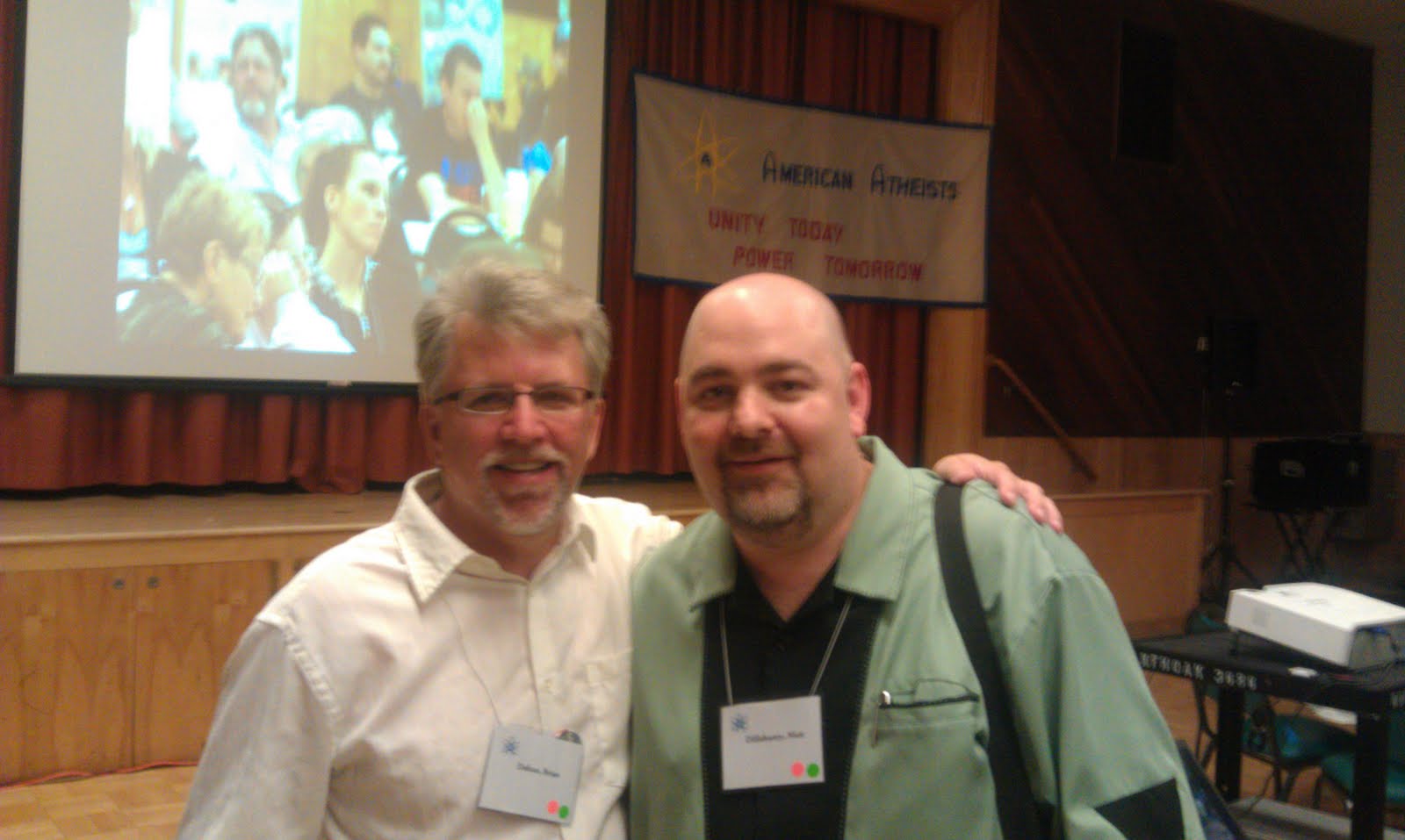 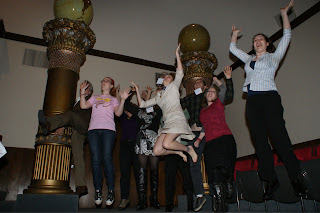 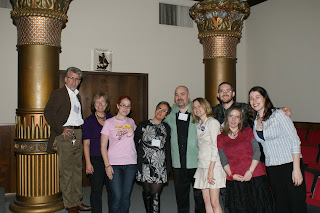 Brian and I had traded a couple of e-mails about possibly getting him on one or both of the shows, but we'd never actually met. After a quick introduction and a renewed commitment to keep the conversations going, he set up his laptop and proceeded to entertain us so that we wouldn't have time to be depressed about the fact that people weren't actually being raptured.

The previous night, I'd mentioned to Donna that I'd been to California many times, but I'd never experienced an earthquake and that I'd love, just once, to get a taste of a tiny earthquake. Nothing terribly damaging, just a little shake.

Well Mr. Deity sure knows how to deliver. A little over halfway through his talk, the earth moved. The Bay area experienced a minor earthquake (3.6) and after I turned and gave Donna a thumbs-up, I just couldn't resist shouting "Is that all you've got!?"

After watching several clips from Mr. Deity and hearing him talk about the absurdity of claiming a Christian basis for the United States while the values we hold sacred are usually the antithesis of the values proclaimed in the Bible, it was time to party like it was the end of the world. 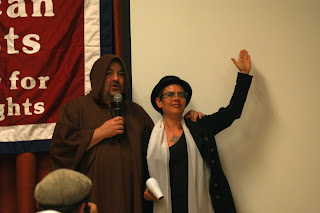 I donned a thick, polyester robe, which covered my stylish, yet polyester, bowling shirt...and managed to sweat my way through an improvised de-baptism ceremony with Greta Christina faithlessly using a blow-dryer to counter the effects of any previous baptisms that the guests wish to be relieved from. (Fun Fact: This silly, fun-filled exercise is exactly as effective as the actual baptisms!)
And Saturday came to an end...
Well, actually, it didn't. I managed to sneak out for drinks with some folks until Saturday came to an end.
Sunday
My Sunday coverage is going to be pretty short (and there will be a third part to this entry)... I got up at an absolutely ridiculous hour and Rebecca and Amy and I headed over to a fund-raising breakfast for CampQuest West. Breakfast was great and it was a good opportunity to raise money by visiting with some of the great people who were willing to shell out extra cash to see whether or not the speakers had good table manners - and to identify which of us clearly went out drinking the night before.
I got to hear David Eller's second talk, just before I had to leave. This one covered building an atheist culture and it prompted a lot of thought and discussion. I really wish I'd have been able to stay around longer and discuss the talk with him, but alas, my plane simply refused to wait.
That means that I missed Rebecca's talk, though I've heard it was great. I really hope someone recorded all of this and decides to post it. I was going to see how far I could impose on Rebecca by seeing if she'd be willing to do the entire talk again, over Skype, just for Beth and I...but instead I'm going to see about having the ACA bring her down to Austin so she can do the talk at our monthly lecture series. (To the ACA board: I swear I'm not just angling to bring my new friends to town...it'll be worth it.)
Mark Boyd was up after Rebecca and I can't comment on his talk. I can, though, say that I'm sorry to have missed it and sorry that I didn't get to spend more time talking to him. We had a very brief chat on the first day and I was pulled every which way for the rest of my time there (though I'm not complaining).
Finally, Greta Christina closed down this event with her talk, "Why are atheists so angry?" While it's true that I wasn't there, I can virtually guarantee that it was the highlight of the meeting. I've heard her give this talk and it nearly brings me to tears. Do whatever you can do to hear it. If she hadn't already been one of my favorite people, she certainly would have been after hearing this.
I'm going to wait a while on posting the third part of this...because I don't want these posts to get lost in a flood of post.