Welcome to Amerika. Where this, I am told, is offensive... 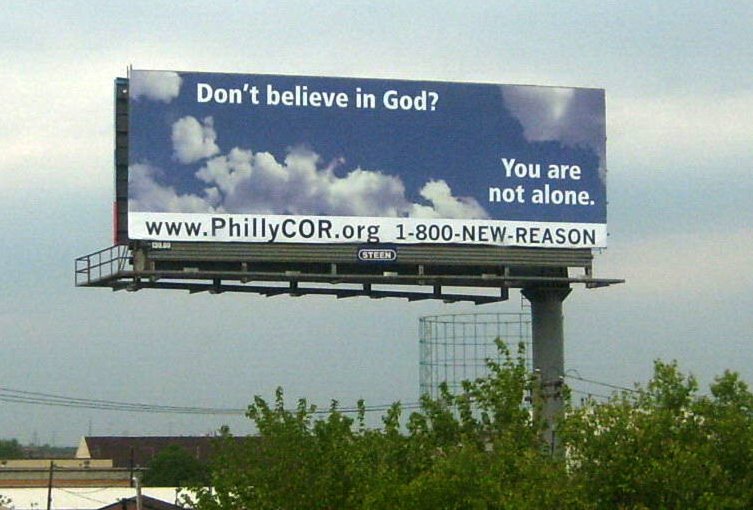 Let's see. The top billboard is simply a message from a group of unbelievers reaching out to other unbelievers who may feel they're alone, isolated in a hostile religious culture. The bottom billboard, on the other hand, is making very curt and rather bullying demands on me. It asserts the existence of this being, God, then it quotes him as claiming to have some entitlement over me, because he supposedly gave his son, and so, like, aren't I just some ungrateful so-and-so if I don't acknowledge this fantastic deal (which I never asked for in the first place) and decide it's in my best interests to "have" this God guy as part of my life.

And yet...well, apparently it's the top billboard that's aggressive and militant. It really has the panties of Denver area pastor Willard Johnson in a twist. He says, "We denounce what they are doing. But we do it with love, with gentleness, with decency and with compassion." Well, that's mighty white of you, Will, the whole love and compassion thing and all. I bet only a Christian would think that denunciations are a form of love and compassion. But be that as it may, why denounce this? What's offensive about it? "Don't believe in God? You are not alone." Is that such a threatening sentiment to your fragile widdle beliefs that you have to denounce it right away? What a sad thing for you.

And here's what else is odd to me. (Well, not odd. Perfectly normal, really, for a "Christian" nation.) Christians put up billboards all the time. Everywhere. Seriously. Some of them are wonderfully silly, some are harmless, some are plain insulting. And yet, it never makes the news when they put up billboards. Only when atheists do it. Why? Why should it be newsworthy, other than as an excuse to give some bozo pastor a little bit of ink to spout his loving, compassionate intolerance.

So, Christians, when you ask why we don't respect you enough, think of this. That there is nothing atheists can say, no message so innocent and innocuous in expression of our disbelief in your invisible magic friend in the sky, that you won't take it as some sort of horrible attack. Just like the time earlier this year, when the FFRF put up their "Imagine No Religion" billboards (which basically just ask you to, you know, imagine no religion), and Christians everywhere went berserk over this "militant" atheist assault on mom and apple pie. Why, one bold and courageous Christian group vowed to fight the FFRF's "hateful" billboards with their own, asking "Why Do Atheists Hate America?" Because, you know, that's not a hateful statement at all.

So you know what? Go ahead, be offended, Christians. That's one of the things you have to deal with when living in a free, pluralistic society. There will be people who think differently than you do, who believe in different things, and who will express those differing views. I know most of you want the place all to yourselves, but you have to share it, just like you have to share it with people of different races and sexual preferences and tastes in music. And if the simplest and mildest expression of a view different from your own makes you go into red alert mode, and wail about the evil militant whomevers who obviously hate the whole country because they aren't just like you, then perhaps you need to step back a bit, take a big fat chill pill, and think quite seriously about who's really got the problem here.

Now...ACA...how about getting a billboard up in Austin? It's time we had one, don't you think? Something like the AHA's bus ad campaign.