A very poor choice of response

I have no ironclad proof that the following comes from Yomin Postelnik. But it seems pretty obvious, and I'll show you my evidence below. And based upon a telephone conversation I had this evening with Kazim, I am willing to bet it most likely has. Someone using the nick "Truthaboutmw" tried to post the following comment here tonight. I rejected it, but am posting it here as a way of revealing just what a pathetic individual we're dealing with here. The comment is as follows.

I'm working on a column, not for Canada Free Press, but for the Austin American-Statesman. It's a lot lighter than the atheism and evolution stuff. I'm actually turning to you because of your background in the film and entertainment industry.

My story's about a cartoonist with a checkered financial history who's been offering updates of a series called the Hempy Dogs or Hepcats or something and asking for paypal donations so people can get the
updates. He promises updates 3 times a week on his site but if you did further he says he discontinued the series in 2006. Still, the website makes this promise of three updates a week and the paypal account is still, remarkably active. I realize that by posting on public forum, he may take down the site, so I've saved its files so that the Sec. of State's office will still be apprised tomorrow morning so they can issue a fine. It's not a criminal matter and I don't involve myself in those anyway, but it is against state commerce laws.

But that's not what I'm contacting you about. I was wondering if you know of the owner, as he claims to be connected with you. If you can get in touch with us tomorrow morning so I can get the facts straight I'd love to know the full story. My source is pretty good, but he had some questions for you because there are some parts to the story he doesn't know.

A little history. In the 1990's I was in fact the creator of a small press comic book called Hepcats, which, like so many small press comics, didn't sell so well, leading me to drop the series in 1998 and pursue different interests.

There are, at present, only two Hepcats-oriented websites that I am involved with or that I endorse. One of these is here, a fan page run by one of the comic's old readers, Stephanie Krus, where I allowed her to post the full run of the series for people to read for free. You will see Paypal buttons there, which are there specifically so that people can order the final remaining copies of the graphic novel collection of the old series.

The other one is a page here at Wordpress, which I put up. It only mentions that, whenever I decide to draw new Hepcats strips, that's where I'll post them.

There is no Paypal button requesting donations. There is no promise of three updates a week in the form of newly-drawn strips, either with Paypal payments or without them. This simply does not exist, nor has any such thing ever existed.

Futhermore, I find that the Wikipedia entry for Hepcats was vandalized on June 12 to reflect the libelous accusations made in the comment. On that date, someone at IP address 74.233.115.163 (which boldly appears on the revisions page, so it's not like I'm invading anyone's privacy here) added the following to the entry: "The series has come under controversy as [[Wagner (artist)|Martin Wagner]] continues to ask payment for strips, which he promises on his site to render three times a week. In reality he has yet to produce a single new strip since 2006." 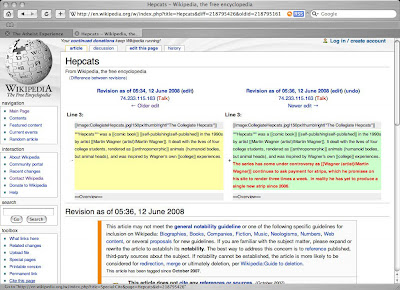 Again, this is simply libel. The same person also repeated the smear in a later paragraph (with his additions here emphasized, tacked on to a sentence that was already there), "In 2006, Wagner announced that he would be finishing the Snowblind storyline as a webcomic, yet he continues to solicit payment with promises of ongoing strips on his website. He has continued this ploy since 2006, all the while promising new strips three times a week."Again, simply libel. I have never in my life offered three new strips a week on a website, whether for Paypal donations or otherwise.

Guess where Yomin Postelnik lives according to his Blogger bio. Lighthouse Point, FL. About 10 minutes from Pompano Beach.

It gets better. In the final act of herculean idiocy, Yomin more or less proved he is the Wikipedia vandal, through several insane edits to my own Wikipedia page. I'm leaving these up for the time being, so my attorney can see them today. Here, he actually states outright he's suing me, and he claims I am a drug abuser and that I filed for personal bankruptcy, both, of course, flat false. (In an earlier edit, he tried to accuse me of pedophilia, but backed down on that one.) 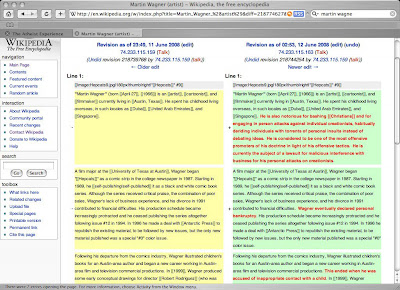 You dumb motherfucker. You brainless moron. Do you honestly think you can intimidate me with this kind of stupidity? Just how dumb are you? Really, that's not a rhetorical question. Do you realize the shit you just stepped in?

Earlier this evening I spoke to Kazim on the phone, who informed me that Yomin had called him this afternoon and spoken to him at length. Yomin wanted to reach me. He described Yomin as sounding "meek," but clearly upset at the post I had written. Kazim told me Yomin eventually got around, in what sounded like a passive-aggressive way, to implying that he might pursue some kind of legal action. Good luck with that, Kazim told him. You can't sue a guy just for calling you some off-color names. Kazim also told me Yomin expressed fear that his consulting business might suffer if potential clients Googled him, and discovered the link to my post ridiculing his article. It is this reference to "malicious interference with business for his personal attacks on creationists" in the Wiki vandalism that convinces me 74.233.115.163 is about 99.99% likely to be our pal Yomin.

Though I promised Kazim I'd refrain from writing a post about the phone conversation in the interests of not beating up on the guy for the sake of it, frankly the above comment and the vandalization of the Wikipedia pages have changed matters. Yomin is the one who has chosen to take this up one notch too many. It is likely to be a decision he regrets.

If Yomin is the guy who's pulled this shit — because, you know, what are the odds there's another kook like him with a big old hate-on for me living right there in his same neighborhood — then he's really made a big, colossally stupid blunder. And he will have proven himself an even more contemptible, slimy coward than any of us had suspected.

Addendum: Commenter Alex Gryson has pointed out (should have thought of this myself, duh) that the IP address 74.233.115.159, which also corresponds to Postelnik's locale and which also appears in the earliest bits of vandalism last night on my own Wikis, is listed in the edit history of Postelnik's own Wiki listing. Tsk tsk. I've taken a screenshot of that page in case Yomin tries to bury that. Also, I've taken screenshots of every individual revision done to both my page and the Hepcats page.

Addendum 3: Yomin has now, as of late Saturday night, started a new thread on Richard Dawkins' forum, in which he plays the victim like an opera diva projecting all the way to the nosebleed seats. His latest excuse for why his IP address appears on the Wiki vandalism is that one of my "cronies" faked it. It seems Yomin knows as little about how IP addresses work as he does how evolution works. Here is Zurahn's schadenfreude-packed explanation to Yomin, from his blog:

Oh, and faked your IP? I’m glad you so openly admit that it was your IP address. Clearly you know as little about computer science as you do biological science. You can only control the IP address on your local network. In order to connect to the Internet and consequently EDIT WIKIPEDIA, your Internet Service Provider’s DHCP server must provide you with an IP address that is unique. Each ISP is provided a range of addresses. If you change your external IP address by editing your router settings, you will not be able to connect to your ISP. So unless you’re alleging that someone from the Atheist Experience went to Florida, got an Internet account with Bell South, waited for your IP address to expire and renewed their IP until it matched the one you had just released, you’re hand is clearly in the proverbial cookie jar.

And I had no idea I had "cronies"! I better not let them know that's what they are...they might start wanting some money!

I've figured out where Yomin got this idea I was offering three new strips a week. Stef's page indicates it will be updated Mondays, Wednesdays, and Fridays. This, however, was Stef's self-imposed schedule for scanning and posting my old graphic novel. It never referred to new work, there's nothing on the page that says it does, and there's no text there soliciting payments with the promise of new work. Stef finished scanning the book in November 2007, as you can see on the page, and she just hasn't edited the page to remove the updates notice.

Meanwhile, Yomin's not meeting with a very friendly reception from the RDnetters, somehow. Yomin's claims that we're organizing harassment against him is pitiful in light of the fact that if I wanted to harass him, I could do it easily. After all, I have his email address. It's not hard to find. Just look at the bottom of the Canada Free Press article I fisked. His "business number" is there, too, making his indignation that it appears here pretty infantile. So if I wanted to harass him, it wouldn't be hard. But I don't. I don't want any contact with the man at all.