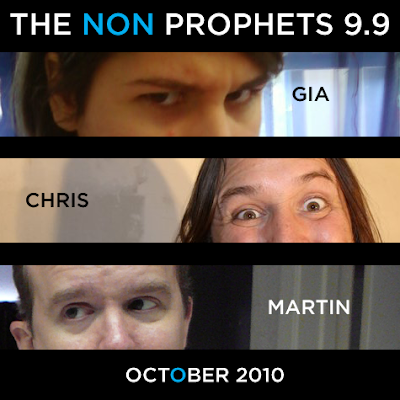 Well, here it is at last, gang. Probably the last of the guerilla episodes, as the regular series is set to resume, I do believe, this coming weekend!

Gia Grillo, Chris Conner and I reteam, and end up spending a lot of this episode wagging our fingers at some of our fellow heathens, expressing our dismay at the way some people in the atheist camp got caught up in the wave of Muslim-bashing that arose around the Park51 controversy. While none of us likes Islam, naturally, most of the rhetoric was simple hate speech from the Fox News wingnut camp that grossly generalized all Muslims, even those who are peaceful and loyal U.S. citizens, under the "terrorist" banner. That some atheists actually fell into that trap of emotion-clouded unreason is something we hate to see.

Then we smack around Phil Plait a bit for his "Don't Be a Dick" speech, and talk about accommodationism vs. confrontationalism.

Not to be a whiner, but holy hell balls this one was tough to edit. But I think the mix is superior to 9.6, even though our different mics and the fact we were basically recording a three-way Skype call means it still isn't audiophile material by any means. (I apologize for my harsh S's.) I hope you all enjoy it, and I'm off for a nap. If you'd rather wait for the iTunes feed, Matt tells me he'll do the necessary admin stuff to get it up on the feed either tonight or tomorrow, so you won't have to wait days and days like last time. And if you want art for your iPod, download the above graphic and stick it in yourself. With 9.6 Russell told me I inadvertently changed the art for the whole feed by embedding it in the episode beforehand. Durp.

Consider the comments to be an open thread on the episode.