We get email: the resurrection yet again

Not all the email we get from theists is totally marinated in crazysauce. Often we get a good letter from someone who doesn't understand a few basic concepts, and is asking sincere questions. Here's a recent email from a fellow trying to make the case that the contradictory Gospel accounts of the resurrection — which I dissected in this post from last year — help to support, rather than discredit, the story.

Whenever I hear atheists talking about contradictions in the Bible (The New Testament specifically) I just don't understand why they think that this is evidence against the veracity of the main message in the Bible. For example, the story of the empty tomb and the contradictions that surround it, is often cited as reason to doubt the stories of the gospel. However contradictions are to be expected! Take the case of a car accident. You could have many different eye witnesses there, and it is almost guaranteed that they will all have some variation in their account of the accident. The same goes for the tomb account. Contradictions due to memory lapses, additions deletions, incidental changes, etc. are to be expected, but ultimately the main message is still there. This in my mind points not to an undermining of the Bible, but rather to the authenticity of it.

Another example that provides evidence for the authenticity of the story is the fact that a woman/women were first on the scene. If the empty tomb was a fictional story then why would they have a women first, when in those days women were not seen as first class citizens or trusted to be reliable.

Anyways I'm just curious as to why these contradictions are used as evidence to doubt the truth of the bible as I have seen done on your show before. (If I remember correctly it was around the time of Easter and Jeff Dee was either the host or co-host)

Okay, fair enough, but our correspondent is missing some basic points. First off, he's not the first fellow to have thought of this. The Rashomon scenario is a common one: different eyewitness accounts, different versions, who do you trust? But there's a little more going on here than that.

When you are faced with different versions of the same basic story, then the question you ask is: how can I verify any of these stories? What evidence can I examine independently, to determine whose version is closest to the truth? The problem with the resurrection story is the same problem faced by all other Biblical accounts of miracles. There is no evidence to examine either way. So you are left with conflicting accounts.

Fine, you say. But that's true of all historical accounts of the ancient world. There's no way to confirm what any of the Egyptian pharoahs did either. So how can you trust all those temple engravings? The thing is, historians aren't dumb, and they know you can't, completely. In the past, just like today, people wrote through the filter of their own biases. Accounts of ancient pharoahs are full of events that enhance their deeds to make them seem godlike. So you basically have to take these things with a grain of salt and see where you're led by what little evidence you can actually dig up.

But getting back to the resurrection, there are problems with the story that emerge even before you talk about the contradictions, and the big one is this: what is being claimed is that a man came back from the dead. Right there, the story moves out of the realm of ordinary historical accounts (like "Caesar led his armies against the Gauls"), and into the realm of extraordinary claims. And extraordinary claims, as the saying goes, require extraordinary evidence. Most historians wouldn't have a problem accepting accounts of Caesar's military campaigns based on routine scholarship. But if someone started claiming that Caesar could teleport and frequently visited his Galactic Overlords at their secret base on Neptune to discuss battle plans, then you've got some red flags going up.

So the problem with the resurrection account is bigger than the problem faced by other, more conventional historical claims. Basically, it's this: You have a book claiming a dead man who was actually a god returned to life after his execution, and the book itself is claimed to the be divinely inspired word of an infallible perfect deity, yet it contains confused and contradictory accounts despite this. For anyone not already so immersed in the faith that they're beyond questioning its claims, you're already into that "Caesar on Neptune" red flag zone even before you start talking about the specific contradictions. 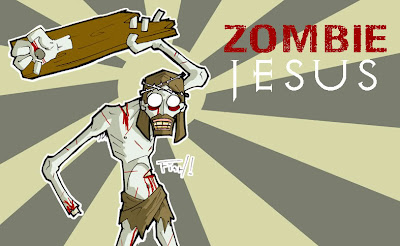 What we're being asked to accept is that, at one point in history, one dead body behaved in a manner no dead body has behaved before or since. And we're not only asked to accept this without hard evidence, but all we're given as a scholarly account is a holy book written by numerous hands, who can't even get their accounts straight.

Where this fellow sees these differing accounts as somehow confirming the truth of the event, I see mythmaking in action. The Gospels were not written until at least a generation after Jesus's death, by which time Paul was already actively engaged in promoting the Christian faith as an act of political rebellion against Rome. It's easy to see how a mythology surrounding an otherwise unexceptional Jewish rabbi (who, as most rabble rousers living in dictatorships often do, got himself executed for being a pain in the ass) would have captured some momentum. It also helps to remember that there are far more manuscripts claiming to be eyewitness gospels that didn't make it into the NT than those that did, and the NT we have didn't really take shape until the beginning of 4th century.

So yeah, there are far more reasons to be skeptical of the resurrection account than there are to accept it. The contradictions are an interesting detail to discuss (mostly in the context of replying to claims about the Bible's infallibility), but they're just a bonus.