Okay, so I read on Pharyngula this morning that Ray Comfort, the World's Stupidest Christian™, rescheduled his giveaway of his bowdlerized Origin of Species on university campuses for today instead of tomorrow, evidently because he heard that people were preparing to counter it by printing up information from the NCSE's enjoyable Don't Diss Darwin site. So naturally, he had to do an end-run around that, since his pathetic, ignorant twaddle sinks like the Titanic when faced with the iceberg of scientific fact.

So I'm trying to make up my mind whether or not to go down to the UT-Austin campus and confront the dopes handing out books. But I'm not sure I really feel like it. For one reason, unless you're a student, or you live down there or have business there, the campus isn't very visitor-friendly. Traffic is a headache, and parking is a righteous pain in the ass at the best of times. And anyway, it would be amusing for a few minutes, I suppose, but then, like all dealings with creationist fools, it would simply get aggravating and tedious.

Finally, I step outside, and I see this. 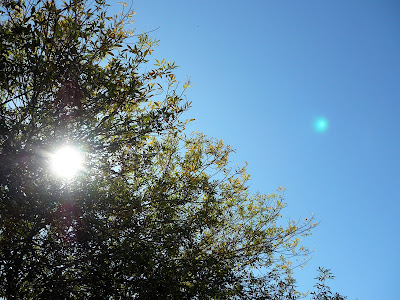 And I think to myself, Wow, an absolutely perfect autumn day. Which is rare enough in Austin, I can tell you. Seriously, we're talking deep blue, cloudless, endless skies, and the temperature like Goldilocks' porridge. Not too hot, not too cold. Just right.

And then I think, now who would I rather spend a gorgeous day like this with? A gaggle of hopeless anti-science morons, or someone with more charisma and intelligence than all of them put together? Say, this guy: 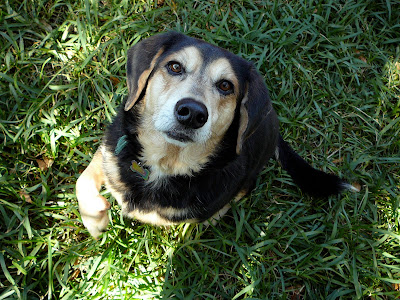 It was not a difficult decision. Grab the leash, dial up a little Miles Davis on the iPod, and it's off to the park we go, big boy!

Really, some days are just too beautiful to ruin.

So, I have no idea yet how the UT giveaway went, and what fireworks may or may not have erupted. I've put an email in to some folks with Atheist Longhorns I know, so maybe they'll have a report for me later.