When I was young(er), Carl Sagan was something of a cultural anomaly: a celebrity scientist. You didn't see too many professional scientists representing on Johnny Carson and other mainstream media venues. Though I'm sure there were more, the only other scientist I can think of who was known by a large percentage of the public about 25 years ago would have been Isaac Asimov, and he was mostly known for his science fiction, actually a modest portion of his entire writing output.

To the young me, then as now a rabid fan of both science fiction and science fact, Carl's particular expertise in astronomy meant that there was a sound field of study underlying the adventure stories that I embraced for my entertainment. It's one thing to read a cool space opera by the likes of Gordon R. Dickson or Poul Anderson, and allow your imagination to soar as you dream about what it might actually be like to fly among the stars. But it's another thing entirely to have a guy like Sagan who could bring you back down to earth with real science, but do so without losing any of that sense of wonder — if anything, enhancing that sense of wonder by letting you see that the real universe was just as wondrous, if not moreso, than how it appears in even the best science fiction.

But in the years prior to his death, I got introduced to another, even more intriguing subject by Carl: skepticism. 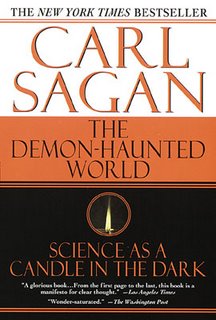 His book The Demon-Haunted World was not the first work of skepticism out there, but it was one of the bestselling ones, and it was the first one that I read. I was, by my mid-teens, already leaning towards a rejection of the religious beliefs I'd been raised with. But as a youth I had no sophisticated arguments with which to defend my skeptical views. Nor was I aware of the extent to which not only superstition and irrationalism thrive in all cultures, but the degree to these problems threaten science itself. I still can never understand why people will reject sound scientific facts supported by strong evidence, while freely and joyfully choosing to believe all manner of bizarre claims and requiring no evidence or proof at all to do so. But they do, and Carl's book, with its remarkable, visually evocative title, brought the extent of the cultural crisis home to me. Our species is shrouded in darkness, a pall built up of centuries of accumulated superstition, fear, and gibberish. Science is there to light the way through this darkness toward understanding. And yet so many people find their darknesses comforting, and refuse even to look at the light.

I'm aware of the religious character of this metaphorical language, and I know Carl was too. That is, I think, why he used those images. In the hopes of penetrating the darkness of even one benighted True Believer, Carl understood the value of reaching them by speaking their language. It may have been a small effort; religiosity is as rampant today as ever and has more destructive power over people's minds and lives than any time since the Dark Ages. (I can imagine how profoundly sad 9/11 would have made Carl.)

But even this small effort mattered, because I think The Demon-Haunted World helped pave the way for my generation of atheists and skeptics and freethinkers, to launch our own causes, and to realize it's okay to speak your mind about these topics, and not let religion have a undeserved pass, simply because it's religion, and "we just don't talk about that kind of thing." Finally, Carl's work had a lot to do with creating a receptive marketplace in which books by atheist writers like Sam Harris and Richard Dawkins could become bestsellers.

So on this tenth anniversary of Carl Sagan's death, I just want to tell him: Thanks. Thank you very much. Your legacy of reason and humanism is greater than you'll ever know, and it absolutely changed my life for the better.

(Posted as part of the Carl Sagan Memorial Blogathon.)