Warren Jeffs is one creepy-looking motherfucker 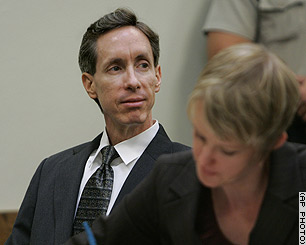 Check this dude out. Drink him in: the scrawny chicken neck, the leering eyes, the oddly bifurcated chin-butt. Mainly it's the leering eyes, though. I mean, he looks like he's scoping out an underage girl right there in the courtroom, while everyone is waiting for the judge to emerge from his chambers. When parents talk to their kids about not speaking to strangers, this is exactly the kind of man they mean.

And yet, this man ran a fringe cult of Mormon separatists who practiced a virtually slave-like form of polygamy in which men north of 50 traded teenage brides like baseball cards, with the only thing invalidating that analogy being that one doesn't fuck baseball cards. How, I wonder, does the cult-follower mind develop? With all of these wacko groups you see, they seem to have a leader — whether Jeffs, or David Koresh (who rarely indulged in the habit of bathing, yet managed to get all his male followers to hand over their wives to him), or Jim Jones — who, to anyone on the outside with a rational brain, is clearly a bad, creepy dude at first sight. How is it that these people cannot see what must be obvious to anyone else? It saddens me to imagine a mind so confused and dysfunctional in its irrationalism, that the person possessing it will gravitate towards any manipulative, sick weirdo in the hopes of finding some peace and direction in their lives.

I'll be too glad for words when this Jeffs perv is put away. Let's hope it's for the rest of his born days.