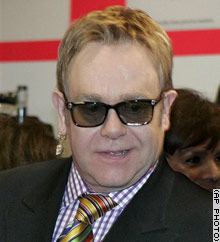 I have boundless respect for atheist celebrities who are willing to come out and risk their fame and public goodwill by expressing their views. Granted, this is doubtless easier for atheist celebs who happen to be gay and out, because they've already leapt one hurdle, so to speak.

Still, Elton John's comments about religion this week will no doubt be snapped up by the "we're so persecuted" camp in the fundie world that all us eeebul godless heathens are out to throw them in the Gulag. And I see that as being a little on the counterproductive side.

"From my point of view, I would ban religion completely. Organized religion doesn't seem to work. It turns people into really hateful lemmings and it's not really compassionate."

The minute you use the word "ban," you leave your opponents an opening to make the blanket claim that all atheists are anti-freedom, and to evoke images of such religion-suppressing cultures as Stalinist Russia or Cambodia under Pol Pot. Yes, I can fully sympathize with John's anger at the way religion currently, even in free societies like America, denies basic freedoms to gays and oppresses them at every opportunity even without the benefit of totalitarian government helping them along. But remember, when you're dealing with irrationalists who are convinced that Christians are the oppressed minority merely defending themselves against the depradations of homos and libruls and commies, you have, I think, a special responsibility to avoid emotionalist, hyperbolic rhetoric.

My response to religion would not be to ban it, but to promote education in critical thinking and skepticism. It really doesn't take much of that for Christianity to crumble. So give people the cognitive tools they lack, and let them draw the obvious conclusions. Banning things is how fundies do their business. We can move humanity beyond that with rationalism alone.