Posted by: Rational Jen
Email ThisBlogThis!Share to TwitterShare to FacebookShare to Pinterest 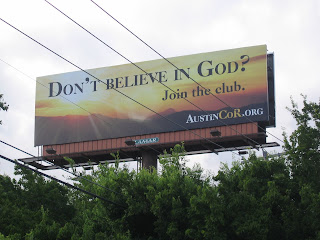 This is what potentially millions of people will see over the next month as they travel south on I-35. The Austin Coalition of Reason, of which ACA is a member, officially kicked off its billboard campaign this morning. The billboard is located on I-35 north of Grand Avenue Parkway facing north. It's a message of inclusion, designed to let other atheists, secularists, and freethinkers in the area know they are not alone.

It's already been picked up by local news media, although KVUE is currently the only channel with the story posted. ACA Board Member and AustinCOR Coordinator, Don Rhoades, has done some heavy lifting today with news interviews. Check Don out on KVUE:

The disappointing thing about the campaign so far - the reporter here just couldn't report the story without putting an overtly religious spin on the whole thing. The title of this story was part of a quote from a local pastor, "Atheist billboard a great advertisement for God."

I guess if you think your god created a planet in a vast universe just for you, you just can't help thinking a billboard is all about you too.

Addendum: Hello, Squid Hordes, and thanks to PZed for the linkage. Feel free to follow us if you enjoy what you read here, gang.