The show tomorrow and next weekend

Just a heads-up for all of you: tomorrow we've got the "No Boys Allowed" episode featuring the Jen & Tracie Power Team, fresh off their total ownage of Blag Hag's poll of atheism's most influential women. What can we say? Hit the UStream early for this one, gang.

The following weekend, sadly, we're going to be pre-empted, a thing that looks like it's going to happen one Sunday per month for the next couple of months, at least. This is due to ChannelAustin using the studio for training purposes, most likely, so there's not a whole lot we can do about it. Well, I suppose we could fill in that weekend by shooting at Matt's place again, but I suspect with his work schedule and getting over a cold, he's probably not up for the hassle of it.

And thus I leave you, dear readers, with a small irrelevant item that I have no doubt will top off your WTF tanks for the rest of the weekend: some imaginative entreprenuer has decided that the one thing women really need when hosting baby showers for their expecting friends is a fetus-shaped cookie cutter. You are encouraged to decorate the cookies made therefrom with the baby's name, thus committing all shower attendees to a bizarre and rather queasy-making form of communion as the baby is symbolically passed around and eaten. Well, necessity is the mother of invention, they say. 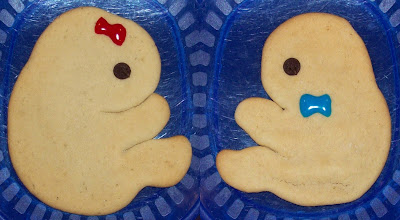