Posted by: Unknown
Email ThisBlogThis!Share to TwitterShare to FacebookShare to Pinterest
As promised, I attended a lecture by E. J. Dionne, Washington Post columnist, at a Baptist church tonight. Dionne was there under the auspices of the Texas Freedom Network, promoting his new book, Souled Out: Reclaiming Faith and Politics after the Religious Right. Here's what the incredibly gaudy church background looked like. 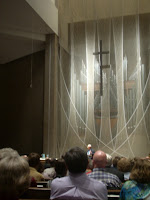 Everything Else Atheist was also with me, and she might write up her own reactions later.

The lecture was about what I expected, which is to say, promising but ultimately disappointing. Dionne believes that religion has a solid place in public discourse, and it has been shanghai'd by the religious right unfairly. He told a joke in which a Republican asks a Democrat what the Democrat would do if Jesus ran as a Republican. The Democrat replies "Why would Jesus change his affiliation after all these years?"

Dionne was full of praise for the importance of religion in people's lives, saying that religion grapples with mysteries that science and politics cannot address. (Well yes, in the first place, many of those issues are addressed by science and politics; in the second place, just because religion grapples with them does not mean that it successfully addresses any of them.) He also leveled a great deal of criticism against what he perceives as the unfairly dismissive attitude toward religion by many liberals, saying liberals assume that all religious people are "busybodies obsessed with sex" based on the prevailing opposition to gay marriage and abortion.

Dionne did make a good point about the way that "moral values" tend to be framed in politics. He cited a clearly slanted 2004 exit poll which asked voters what issues most strongly influenced their vote. The options included such things as "moral values," "education," "the Iraq war," etc. Dionne rightly pointed out that if you describe either of the latter two as your most important concerns, then you are implicitly agreeing that moral values are less important to you. In reality, as he then pointed out, if neither education nor war is regarded as a moral concern, then there is something seriously wrong with our thinking. On the other hand, I of course believe that it is a mistake to attempt to unduly equate moral values with religious beliefs.

In the end Dionne suggests that it's important for Americans on both sides of the political spectrum to embrace their faith and accept it in public life.

There was a Q&A period where people walked up to microphones. Unfortunately I was not very nimble and wound up sixth in line, with answers to the first five questions taking up a good 5-10 minutes or so each. Luckily he still had time to answer my question, but after I went up he asked the remaining people in line to limit themselves to a brief, unanswered comment. I will try to reconstruct my statement/question from memory, and then summarize his response.

"Mr. Dionne, thank you for coming here tonight. My name is Russell Glasser, my father and I are long time fans of your column. I am also a member of the Atheist Community of Austin." [Dionne jokingly interjected "God bless you" to which I simply replied "Thank you."]

"Speaking as someone from the 15% of voters who do not claim any personal god, I feel that unbelievers are often caught between a rock and a hard place when it comes to selecting a political party. I believe that somewhere around 80% of us voted for both Kerry and Obama. [Dionne nodded, indicating he was familiar with this.] Many atheists might be there by default, because frankly the Republican party is full of lunatics. I personally know only one atheist Republican, while most atheists who lean conservative gravitate toward the libertarian party.

"I think the reason separation of church and state is so important is not simply because it panders to people like me, but because religion is a deeply personal issue to many people. When political figures interject a religion into the dialogue, they are implicitly excluding other religions. As you pointed out, the religious right say that religious values are focused around gay marriage and abortion, which is different from the beliefs of many of the people in this church now.

"What I'm wondering is: Aren't you concerned that by encouraging politicians on the left to use more religious language, you are buying in to the notion that this sort of exclusion has a place in politics? It seems to me that even this much is conceding too much to the right regarding their perspective about the appropriate role of religion?"

I got a smattering of applause for this remark. Dionne answered that he understands my concerns, and mentions that he always says to believers that they ought to seek out conversations with atheists, because they should be prepared to defend their beliefs. Not quite the answer I was looking for, since I am more interested in wanting to engage with atheists at least partly out of recognition that there is no need to believe in God as a prerequisite to work towards shared social goals.

He then went on to say that it is possible to talk about religion without being disrespectful to nonbelievers, and it is important to do so. Finally, he added encouragingly that he would bet atheists are probably under reported by polling, since fewer people will admit to it.

After talk I saw a few familiar faces. Dr. James Dee popped up in the last set of people interjecting comments and made a comment about needing to read the Bible in the original languages. A regular commenter on this blog came up to me in the lobby and introduced himself, adding that he'll be joining us on the bat cruise this weekend.

In conclusion, I understand what Dionne is trying to do, but I still come away deeply unconvinced by the argument that the solution to religion in politics is more religion in politics. While I agree that it would be a mistake to ignore the role of religion in history, I see no compelling reason to believe that religion is a necessary or sufficient motivator to bring about positive changes. To give credit to God for human achievements is, in my opinion, an insult to human spirit. And considering the potential that religion always has to divide people, I really feel like Democrats should be especially wary of trying to use it for short term gain.