"Questionable content" allowed, but only from Xian Right media whores

Did a double take the other night at my neighborhood HEB grocery store, when I saw this, ahem, interesting display for ol' Annthrax's latest dose of poison, Godless: The Church of Liberalism. (The skank says "godless" like it's a bad thing. Weird.) Click on the image to see a larger version, if that's what you need to read the sign. 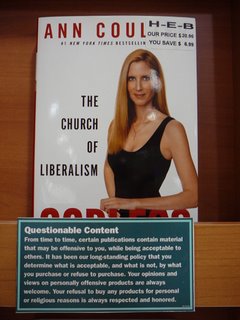 A couple of points by way of preamble. As a rationalist I think there are very few absolutes in life, but freedom of expression, thought, and of the press is one of them. While I weep for the trees, the Coultergeist has every right to haunt bookshelves with her pig-ignorant, hate-filled, fact-free screeds as anyone. I, and other people with brains, have the right to call her on her merde, and mercilessly ridicule her books (especially the hilariously lame Photoshopping done on her cleavage — clearly she felt the need to make up for deficiencies in the work of her intelligent designer).

But there's just one problem with the little disclaimer on the HEB display here. It's one of the most egregious exercises in hypocrisy I've ever seen, on a par with Fox News's farcical "fair and balanced" taunt. Indeed, its dishonesty is truly worthy of the Coultergeist herself.

The text on the sign begins by giving the reader the clear impression that this is a book about which a large number of HEB customers have complained to the management, enough to prompt the management to take at least one meeting. Now, in this particular store (I have not yet been to other HEB locations to see if this display has been duplicated), the book and magazine aisle is pretty well stocked for a supermarket. There are good displays of current releases and bestsellers in both hardcover and paperback, fiction and nonfiction.

Annthrax's little literary chancre is the only book tagged with the disclaimer sign. Not only that, it has been given the most prominent display on the aisle, running five rows deep (with, hooray for small mercies, only one copy per row, but the vertical layout gives the impression of heavy stock). You can't see it in the photo, but right above the book is a bigger sign screaming "Featured". Immediately the question arises, if the book's content is so "questionable," why feature it? Why the prime real estate, if HEB is truly respectful of the concerns of customers who have been insulted and disgusted by said questionable content (a nice harmless euphemism for "filthy lies," that, don't you think)?

Certainly, respect for free speech and the free press means that customer complaints alone should not result in a book's being removed from the racks. But why give Mindless — excuse me, Godless — any more prominent a display than anything else? A great many books have questionable content. That assrocket Kevin Trudeau, with his idiotic and possibly criminal books about "natural cures," didn't get this kind of display. I saw theocratic ex-judge Roy "Constitution? What Constitution?" Moore's book there as well. These books were just mixed in with others in the book aisle, getting no special treatment — as it should be.

The fact is that Annthrax's "questionable content" sells, another indication of America's inexorable downward spiral to the status of intellectual third world country. What HEB has concocted here is a masterstroke of meretriciousness brazen enough to give Karl Rove his first boner in 30 years. They pose as staunch champions of free speech (what are you, a buncha liberals?) and the consumer's right of choice. But if that's what they are, why not carry Hustler, Mein Kampf, and that wingnut favorite The Turner Diaries, and really put their stated "long-standing policy" of letting customers "determine what is acceptable, and what is not, by what [they] purchase or refuse to purchase" to the test?

If you answered, "Because the sign is as big a pack of lies as Godless's brain-dead anti-evolution ravings," go to the head of the class.

The Coultergeist is truly a gift to her like-minded fellow liars everywhere. By baiting people with reactionary falsehoods rather than engaging in anything like thoughtful, informed discourse, she creates books that court the kind of controversy that has become the most commercially viable publishing trend in Bush's anti-intellectual, anti-reason America. (Next to outright plagiarism, and she's even reportedly hopped a ride on that bandwagon, too.)

She allows her fellow know-nothings to flatter themselves that they possess knowledge and expertise. And she allows corporate entities to flatter themselves that they are being socially responsible by addressing the controversy she courts, while, thus having morally absolved themselves, going ahead and cashing in on her crap anyway. Easily the most dishonest part of the disclaimer sign is its last sentence, expressing respect for customers' refusal to buy "questionable" products, while the whole display of which the sign is a part is designed entirely to make the product more attractive to potential purchasers.

This is lying as performance art. I'm truly in awe. I suspect even Ann herself would be too. But I think her reasons would be...questionable.