Pre-show remarks: I'm going to go ahead and get this post up now, so folks will be able to comment as soon as the show ends today — or heck, even comment live as it's progressing. Anticipation for this one has been off the chain. I don't think I've ever seen anything like it in my 12 off-and-on years of being involved with AETV, and I imagine we'll easily have the largest UStream viewership we've ever had. With about 4½ hours to go at the time I'm writing this, already the chat room is packed. So if you haven't already done so, run to the store, stock up on popcorn or your preferred snack-of-choice, and get ready. I'll see you back here for the post-mortem.

By the way, you can stop sending us "Q for Ray" questions now. We've gotten literally hundreds of them (though the number of viable questions is significantly lower once we weed out all the banana-related ones), and I have no idea how much of the show will be devoted to viewers' questions and how much will be straight-up debate between Matt and Russell and Ray. So it'll go how it goes, gang. I'm sure we're in for a good time all the same.

Postmortem: Well, how about that, eh?

As you can well imagine, watching this was, for us co-hosts, an endless exercise in screaming frustration that we couldn't be on. There were so many moments where I could have shut Ray down in an instant on many of his usual arguments, though Matt and Russell did fine work, as I'm sure I don't need to say. I could probably do a whole blog on the first 10 minutes of the show alone. Suffice it to say that it was all roaringly entertaining, and extremely informative, for those who want to know how a mind (and I use that term advisedly) like Ray's functions. So many of the arguments Ray hopes to employ against atheists are nothing more than ammo we could easily turn around on him. It's pitiful that he does not recognize this.

In order to keep this post from reaching Atlas Shrugged length, I'll concentrate on two PRATT arguments Ray loves to bring up, and which we saw dusted off and put through their paces again today. "Something from Nothing" and "A Painting Requires a Painter".

That things in nature, including the universe itself, appear to be designed, is intuitive to us, because we are pattern-seeking creatures. But where Christians like Ray go phenomenally wrong is in confusing and conflating order and design. Design, at least as Christians use the term, implies intelligent agency and purpose. Order is entailed by the nature of existence itself. As George Smith points out, to exist at all is to exist as something. But order alone is not evidence of intelligent design. The great irony of Paley's Watchmaker argument is that it demonstrates this. To deduce that the watch in the desert must be a designed artifact, the observer is reaching that conclusion by comparing the watch to its surroundings. The watch stands out because it is wholly unlike the desert. The Watchmaker argument proves, if nothing else, that deserts are not designed.

Ray lives in a curious alterna-reality in which he claims everything is the product of divine design, which prompts the question of how he knows (other than the Bible told him so), what frame of reference he is using to distinguish design from non-design. I wonder if Ray has ever looked at those grains of sand he keeps bringing up under a microscope, though. When you do, do you know what you see? Something like this: 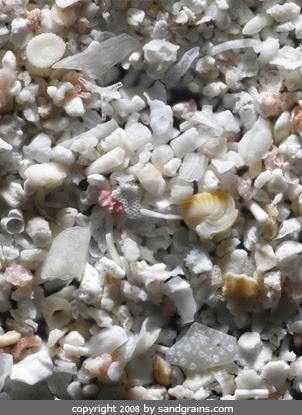 No two are alike. No two have precisely the same chemical or mineral composition. Ray would, no doubt, insist that God is so awesome that he literally can design each and every individual grain of sand as lovingly as a work of art. That in his omnipotence, God can effortlessly lavish such loving attention on even the smallest thing. And that's the problem when you argue with someone about their imaginary magical friend. There are no rules in magical thinking.

If sand grains were designed, wouldn't you expect to see more uniformity? Most designers, after all, prefer to work from schematics and templates, from blueprints and preliminary concepts. The photo above suggests a couple of options for those inclined to think like Ray. 1) The grains of sand are the random product of erosion and other natural processes that determined their shape, mass, composition, color, and all the rest of it. Or 2) they were designed by a God who, for reasons best known to himself, intentionally made them look random. But why? In order to trick us, or just to show off his artistic side, or what?

The problem with positing a God over natural processes in a nutshell: With nature, you're allowed elegant, simple, and in most cases empirically verifiable explanations for what is observed. With gods, you now have to add a whole new host of arguments and explanations to understand why this magic being would have gone about his business one way as opposed to another way. And not one of these arguments comes with evidence that allows you to test it. It's all down to that old bugaboo, "faith," in the end. Gods not only don't explain things, they pile on more inexplicable, unnecessary nonsense.