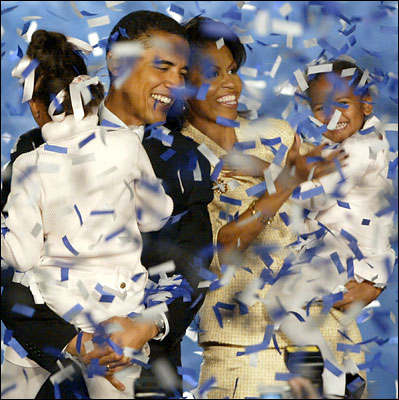 Jeezis. And I thought the format war between Blu-Ray and HD-DVD discs was the ultimate example of a completely lame and unnecessarily drawn-out battle towards a foregone conclusion. Now that Barack Obama has the delegates to get the Democratic nomination — an outcome perfectly obvious and inevitable for a long time to all but Hillary Clinton and her most doe-eyed disciples — hopefully we can get on with things and enjoy an exciting campaign between now and November.

There seems to be a lot of pressure right now on Obama to offer Hillary his VP slot. I'm agin' it, mainly because I dislike Hillary intensely and am convinced she's simply been body-surfing her ego for the last several months, putting her ambition above the good of her party and the country. People praise Hillary for her never-say-die "fighting spirit," failing to recognize that that isn't a praiseworthy trait in and of itself. After all, creationists have plenty of "fighting spirit." If your "fighting spirit" is rooted in hubris and delusion, and a mule-headed refusal to acknowledge reality, then your role model for said "spirit" is the Black Knight from Monty Python and the Holy Grail. That isn't the kind of "fighting spirit" I want in the White House. It's what we've had for the past seven years, and look how that's turned out.

The argument for offering the VP slot to Hillary is that she does have a thoroughly fanatical contingent of supporters who seem to have bought into her ideas that the presidency is some kind of entitlement for her, and if she isn't the Democratic nominee, will cast a revenge vote for McCain in November, thus plunging the country into four more years of Republican-led foreign policy disaster (McCain has voted with Bush over the years on damn near everything, so anyone who thinks he's going to be a standard-bearer for "change" really needs to start taking better drugs) simply to salve their bruised feelings. Bring Hillary into the frame as Obama's running mate, and perhaps her supporters will chill and, most importantly, not jump ship.

Still, I can't help thinking that Obama's choosing Hillary for his running mate would be not unlike a long-suffering parent caving in and buying a toy for an ill-behaved and unruly child, simply to stop it constantly screaming and crying and carrying on. Not exactly a character-building choice, if you take my meaning. I've read from more than one source that an Obama/Edwards ticket will trounce McCain/Anybody come November, and that would be a ticket I could get behind with enthusiasm. Still, if Obama does choose Hillary (and she accepts), he will still get my vote. After all, my vote's not about my ego, it's about what I think will be the best way to undo the damage that eight years of the cretinous Bush have left us in. And that comes down to casting my vote for a fresh voice and a sincere agent for change, not a huggy sycophant.

Okay, Hillary lovers, bring it on...!