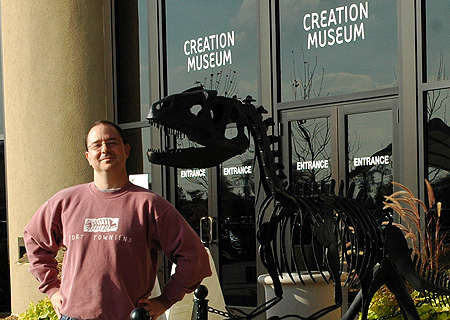 Popular blogger and science fiction writer John Scalzi has returned from his trip to Ken Scam's Creation "Museum" in Kentucky (the trip that he promised his readers in return for the $5000 they Paypalled in, which he donated to Americans United for the Separation of Church and State), and boy, does he have a report for you. Go read. Hilarious stuff. Here's the intro for the warm, nougat-y flavor of the thing:

First, imagine, if you will, a load of horseshit. And we’re not talking just your average load of horseshit; no, we’re talking colossal load of horsehit. An epic load of horseshit. The kind of load of horseshit that has accreted over decades and has developed its own sort of ecosystem, from the flyblown chunks at the perimeter, down into the heated and decomposing center, generating explosive levels of methane as bacteria feast merrily on vintage, liquified crap. This is a Herculean load of horseshit, friends, the likes of which has not been seen since the days of Augeas.

And you look at it and you say, “Wow, what a load of horseshit.”